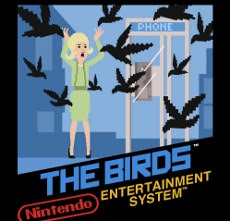 Joebot imagines if Nintendo had made video games based on Alfred Hitchcock's movies. He writes: "Had Hitchcock been just a few years behind I'm almost certain that Nintendo would have jumped on the chance to make video-game adaptations of some of his most iconic films. I'm almost certain that their game boxes would have looked a little something like this."
Email Post