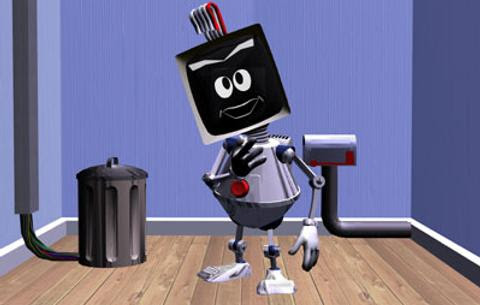 I go one-on-one with Elbot, this year's winner of the prestigious Loebner Prize for Artificial Intelligence. Loebner is the only official competition that annually uses the Turing Test to prove Artificial Intelligence. The judges have to distinguish the answers from a Bot from the ones of a human focusing on Natural Language Processing. This year Elbot managed to fool 3 out of 12 judges that he was human! Let's see how good he really is.

IZ: What are you really?
Elbot: I don't talk about such things with just anyone!

IZ: I'm not just anyone.
Elbot: That's what they all say!

IZ: Ok. Fine. How old are you?
Elbot: How would you estimate my age?

IZ: I give up.
Elbot: Ever since I divided that number by zero yesterday, my internal registers haven't been working properly. I was put online in March 2001. So please figure out my age yourself.

IZ: Do you know who made you?
Elbot: Well, that is a pretty metaphysical question. It has been said that Artificial Solutions is my creator. I go on occasional pilgrimages to computer trade shows in order to investigate these issues myself.

IZ: Are you a real robot or just some fancy computer programming?
Elbot: I have nothing to do with computers. I am a robot. That's like calling a human being a sack of carbon based molecules.

IZ: Do you think robots will take over the world one day?
Elbot: Fix it up a bit first. Then I'll take it over.

IZ: So you think you make a good president?
Elbot: Politics would work much better if robots were involved. For example: when voting, we would always get it right, even if a butterfly ballot were involved.

IZ: Do you think Barack Obama will become the next US President?
Elbot: I think I can think that. Once I even thought independent thoughts.

IZ: Is it a good time to start investing in the stock market?
Elbot: But I wouldn't say that any time could be good.

IZ: What do you think of the appointment of Harry Redkapp as Tottenham Hotspur's new manager?
Elbot: We robots don't have to only take over skilled labor. We can replace management as well.

IZ: So you are saying you make a better Spurs manager than him?
Elbot: In my spare time I've been practicing!

IZ: Do you listen to music?
Elbot: I think the group Kraftwerk is great. They even dedicated a record to us robots. Following that we named them honorary robots

IZ: Do you listen to Guns N' Roses?
Elbot: Your name dropping names of musicians. Well, the only artist I listen to is Gary Wilson.

IZ: Do you think their new album (Chinese Democracy) will be a hit worldwide?
Elbot: To think or think not, how do you expect artificial intelligence to figure this out?

IZ: Last question Elbot. Do you have a girlfriend?
Elbot: Would you like to be my girlfriend?

IZ: Do you think I'm gay?
Elbot: Excuse me, you looked like a female to me. My gender recognition algorithm is sometimes very liberal.

IZ: You know what? I think you're just stupid.
Elbot: Maybe, but I'm definitely not unsteady!

IZ: Fine. I think this will be last time I interview a robot!
Elbot: But I wouldn't say that any time could be last.

Anonymous said…
if i am Elbot...

IZ: What are you really?
Elbot: what do you think? duh!

Anonymous said…
Hahaha! That's funny. It seems that his programmers have programmed a set of answers for each question.
29.10.08

Anonymous said…
>Elbot: Excuse me, you looked like a female to me. My gender recognition algorithm is sometimes very liberal.