Han Solo in Carbonite, no, it's Guacamole! 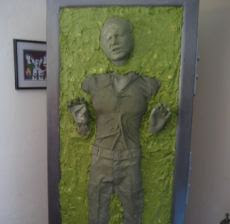 In Star Wars: The Empire Strikes Back, Han Solo was frozen in carbonite and given to Boba Fett as a reward by Darth Vader. Robert Saccenti attempts to recreate the iconic Han Solo in carbonite statue with his own version, Han Solo in guacamole made with 50 avocados, garlic, cilantro, salt, pepper, a little onion and lots of lime.
Email Post