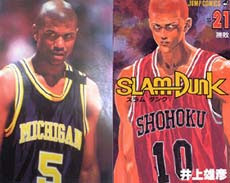 Slam Dunk is a popular Japanese manga about a basketball team from Shohoku High School. In late 2005, a comic industry magazine alleged that some of the cuts of players drawn in Slam Dunk are almost identical to the photos of NBA players in basketball magazines. You can view a side by side comparison of the manga frames from Slam Dunk and the photos of NBA players here. The similarity is remarkable aye.
Email Post

Anonymous said…
It's hard to believe after looking at the pictures if the Slam Dunk creator says no he did not.
14.2.07