Video of US friendly fire that killed a British soldier 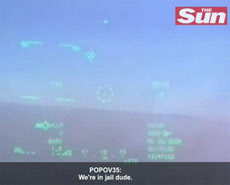 British paper The Sun has an exclusive cockpit video of a US A10 military aircraft taken during the disastrous friendly fire attack on a fleet of British vehicles in Iraq that killed one British solider four years ago. You can also watch it on Google Video. The video is really amazing to watch especially when you hear the pilot's shock and remorse after he realised that he and his wingman had shot at 'friendlies'. Here's the transcript. The US said that it was an accident and that they had found no reason to take action on their two pilots but The Sun claimed that the pilots made six crucial errors.
Email Post