My friend Joan, the uber cute violin player in UnXpected, is having her first concert, Violin & Radiohead tomorrow (Tuesday Oct 30) at 12.45pm in the Concert Hall of the Esplanade: 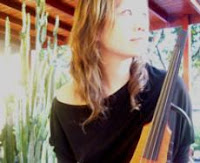 Mention “violin” and classical music will come to mind for most. In this concert, hear it taken out of that context and placed…not in fiddling, not in jazz, not in bluegrass but alternative rock.

Joan Chew learnt the violin the traditional way - classically. While she loves her Bach, Beethoven and Brahms, she has an open mind about music and digs alternative rock and jazz. She believes music should be an expression free of boundaries and labels.

In this performance, hear Joan and like-minded musician friends interpret the music of Radiohead.

She just text me saying that she's currently practicing (poor gal - at 11 plus at night!) and she's feeling excited and nervous about her concert. If any of you guys and gals are in the Esplanade vicinity tomorrow during lunchtime, do give Joan your support (and love) aye. Her concert is free of charge! I think it will be really cool listening to her violin renditions of some of the popular songs of Radiohead. Despite my begging, she won't be doing my favourite Radiohead number, Creep. I don't have the setlist but some of the Radiohead hits she'll be performing are Paranoid Android, Bulletproof and Where I End And You Begin.
Email Post