I think this is the most educational posting ever on Stomp! Stephen Forshaw, Vice President Public Affairs of Singapore Airlines writes to Stomp to explain why planes fly with inverted national flags: 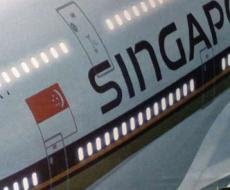 "The position and depiction of the flag is correct; the depiction of flags by airlines on the exterior of the aircraft has it origins in shipping, where the ensign of the country is flown off the stern of the ship.

"In shipping, as in aviation, precedence cannot be established as it would on land by flying a flag from the tallest point, so the stern (or in the case of an aircraft, to the rear of the insignia) conveys precedence (ie shows the country of origin).

"According to flag etiquette, which again traces its origins back to shipping – and was reaffirmed in the earliest days of commercial aviation – a national flag should never be seen to be travelling backwards.

"If the flag were replicated on the starboard side of the aircraft as it is on the port side, when the aircraft is travelling forwards, the flag would, then, be flying backwards.

"From the port side of the aircraft, the flag is viewed as you would expect to see it flying on a flagpost, and when the aircraft is flying, it will fly as it would on a flagpost in the breeze – with the five stars and moon leading, and the red and white sections following.

Anonymous said…
Aah..I had to think about that for half an hour to understand, but I finally did.
27.10.07

Anonymous said…
i agree! esp since there are a lot of crap posts on stomp like pple showing the butt cracks inside trains or buses, etc.
27.10.07

Anonymous said…
like dat also muz get vp of public affairs to reply one. dun they have small fry pr pple to do it??
27.10.07