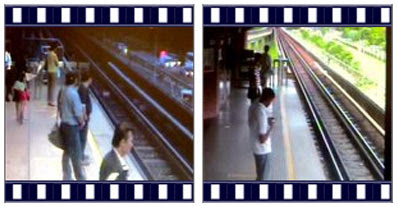 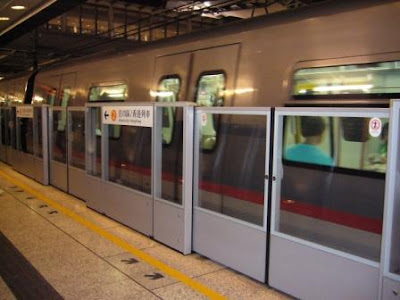 Are platform screen doors such as the ones in Hong Kong (see picture above) the answer to Singapore's MRT suicide problem? I'm all for full height platform screen doors to make it impossible for one to jump onto the MRT track. Half height or chest level ones can still be breached by climbing over them.

SMRT has said that installing these protective barriers costs a lot of money but I think that they should just go ahead and do it for the sake of public safety and to prevent more suicide cases. Another solution is to make the trains slow down considerably before they reach the station but that will obviously delay the timings of the trains.

Update: SMRT confirms the authenticity of the videos and say that they are investigating how they got leaked.

Update: Metacafe and YouTube have removed the videos. If you're lucky, you can still find them hosted on other video sites. Jeremyphotobooth who I mentioned in my post above, has been called to the police for questioning. He has removed the videos. Another blogger who some believed to be the first who posted the videos on his Multiply site has informed me that he too has taken down the videos.

Update: Some of you informed me that one of the videos can be found on LiveLeak.com. It even made it to LiveLeak's featured videos a couple of days ago. Singabloodypore also has the videos.

Update: A list of MRT deaths plus another person hit by the train today (Friday, March 2, 2007)

Anonymous said…
Knowing SMRT and the gahmen very well, they will increase the fares if they install these platform doors on all the open air stations.
25.2.07

Anonymous said…
It says the video is taken from a close circuit camera but why is it shaking?

Anonymous said…
I expected to see blood splattering onto the platform above or onto the front of the train.
25.2.07

Anonymous said…
i hate to say this but all these people are really a nuisance.

want to die, die somewhere else lah. don't make problems for other people!
25.2.07

Anonymous said…
Call me a sadist, but it would be better if we can hear the audio of what happened.
25.2.07

Anonymous said…
all mrt trains can slow down manually.

they can slow them down at about 20m from the station.

by the time they reach the platform, they are moving so slow that anyone who want to commit suicide will fail.
25.2.07

Anonymous said…
Love all those suicide ads appearing to the right of your post.

Anonymous said…
it is stupid to commit suicide on a mrt track because you still have to get into the station and pay for a ticket just to die.
25.2.07

Anonymous said…
jdsg: Both in december. yishun and admiralty stations.
25.2.07

Anonymous said…
We cannot stop people from killing themselves but we can surely make it more difficult for them to do so.
25.2.07

Anonymous said…
The guy in the second video mistimed his jump!
25.2.07

Anonymous said…
they will only do something when there are one suicide case a week.
25.2.07

it is stupid to commit suicide on a mrt track because you still have to get into the station and pay for a ticket just to die.

Anonymous said…
Yes, I think MRT should install those full height platform screen doors. It is basic safety not only to prevent suicides but also prevent others from falling into the tracks.
26.2.07

Anonymous said…
The only reason why underground stations have platform doors that cover all the way to the top of the ceiling is because SMRT doesn't want to waste their aircon.
26.2.07

Anonymous said…
can sense that was gross when read those descriptions/comments, nvr wanted to watch it ><" make me sleepless :s
those ppl just sad :( suicide dont make things go well, go get some help, counselling anything then suicide -.-" man... geee...
26.2.07

Anonymous said…
I am glad that these videos got leaked out. At least it gets people to talk about them and the authorities can look into problem and find a solution.

The MRT is used by thousands and thousands of commuters daily. There should not be an interruption to the service every time when someone jumps down the track so the best way is to install the platform doors. A lot of countries with similar rail systems have done this so why can't Singapore where the standards of safety are supposed to be high?
26.2.07

Anonymous said…
Want to die can but don't make people late for their appointments liao!
26.2.07

The second incident shows the man clearly having the intent to jump. He is nervous and fidgety. Nobody seems to have noticed that.
26.2.07

Eric said…
that is seriously ..
the first video is worse than watch final destination ..
SHIVERS MAN.


and like, in the second video, did the guy survive .. cuz it look as though he managed to go underneathe the train .. however, his head must have hit somehting .. OUH MY GOD.

which r the other stations that got suicides huh?
27.2.07

Anonymous said…
Think instead of donating money to help the family members SMRT should make the family members pay for the damages. Tht way, nobody would ever dare to think about commiting sucide by leaping down the plattform
27.2.07

Anonymous said…
Insensitivity to the families of the deceased aside, I think it was great that such videos got leaked.

It goes to show how f**ked up SMRT is. How could a man have crawled under the platform unnoticed by staff or even other passengers? That Yishun suicide was 100% preventable.

And I think the police are over-reacting abit. I suspect it is the police officers (probably NSFs) themselves who leaked the video.
28.2.07