Star Wars: The Clone Wars coming to the cinema in August 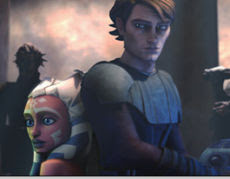 I was excited when George Lucas first announced last year that he's going to make the animated Star Wars: The Clone Wars series for television. Now I'm ecstatic to learn that he will be premiering an all new animated feature film in the cinema this August. This will be followed by the TV series to be shown over at Cartoon Network. I've watched the sneak peek many times and I'm already in love with The Clone Wars. Watching it on the big screen will definitely be a blast. Hey it's Star Wars after all!
Email Post