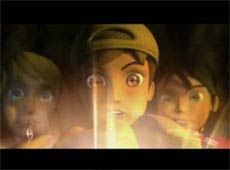 Ghost Hunter Dax is a 3D animation co-produced by Singapore's Studio Bizarro and Infinite Frameworks and Canada's Mainframe. The show is currently in the beginning of pre-production stages and is slated to hit televisions in late 2007 or early 2008. Ghost Hunter Dax is a story about a bi-racial Chinese American boy who moves to China with his family only to find that he's the decendant of an ancient Chinese ghost hunter named Zhong Kui. Due to his relation to the ghost hunter, he ends up having to take up the mantle and go into the Land of Shadows and vanquish the threatening evil forces that lurk there. Watch the cool trailer here.
Email Post

sifu said…
IZ...I am dissappointed that there isn't a link to local animation studio infinite frameworks...cos the 3d animation for he trailer was done by the local post production studio.
19.8.07