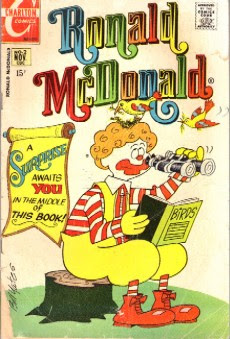 This is a gem! Ronald McDonald starred in his very own comic book published by Charlton Comics in the 70s. We all know Ronald is a clown, and clowns are dumb, but I think drawing him with birds making a nest on his head, makes him look even more stupid. No wonder McDonald's decided to cancel the comic. More stupid comics here.
Email Post