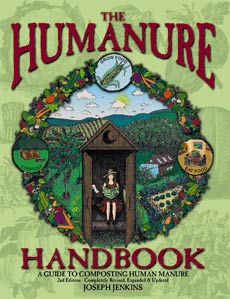 Learn how to recycle your own shit by reading this online version of The Humanure Handbook. The book has won awards in the US such as "Outstanding Book of the Year" and the book "Most Likely to Save the Planet." Some words from the author: "Nevertheless, I first published the Humanure Handbook with a great degree of trepidation. After all, recycling your own crap can be as bizarre to some people as a chicken with tits. You could suddenly beam down from the planet Uranus and raise less eyebrows than someone who refuses to flush. In fact, sometimes I feel like I did beam down from another planet when I see all the crazy things humans do to the Earth's environment. So I wasn't sure I even wanted anyone to read the book, and although I knew some people would be fascinated, I just didn't know who or where they were. I estimated there were maybe 250 people in America interested in the topic of humanure composting (roughly one in a million), so I printed a small number of books the first time around and assumed they would sit in my garage for the rest of my life until I discovered, one by one, those potential readers."

(Thanks Sir Thomas and no, I'm not going to recycle my shit anytime soon)
Email Post