Water is flowing on Mars 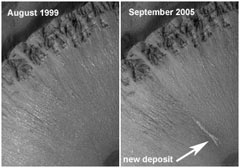 Newly released NASA images are suggesting that water still flows occasionally on the surface of planet Mars. This picture on the left shows a bright deposit on a Martian gully not seen on a similar photo taken years earlier. Scientists say that these fresh deposits show that liquid water is emerging from beneath the ground and briefly flowing down the slopes. This possibility raises questions about how the water would stay melted below ground, how widespread it might be, and whether there's an underground wet habitat conducive to life. As we all know, liquid water is an essential ingredient for life to take place.

I was very excited when I read this piece of news earlier today. I remember giving an astronomy talk in 2000 and I said then that over the next four to six years, we will have prove that water is flowing on the Martian surface. During the question and answer session, some fellas disagreed with me because they said water cannot possibly flow on Mars now because its temperature is far too cold and the atmosphere is too thin. Of course, I was right after all. I also said during the talk that we will find evidence of some sort of life on Mars within the next 10 to 15 years. Well, the clock is ticking.