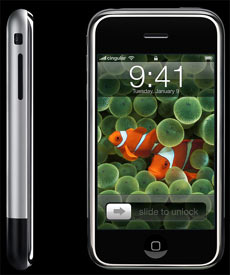 Apple Computer Inc, oooops wait it's Apple Inc now (gone is the Computer from its name), has launched the iPhone, a product so revolutionary that it says will be as successful as the Macintosh and the iPod. The iPhone is a beauty and comes with a whopper of features. It's operated by OSX (wow!) and comes either with a 4GB or 8GB storage. Besides its phone function, the iPhone has a widescreen iPod that plays beautiful videos too. You can surf the net, do all the things you normally do with a PDA and take photos through its 2.0 megapixel camera.

The iPhone will be launched in North America in June, in Europe by the end of this year and in Asia in 2008. Apple will offer the iPhone through Cingular in the US and it will cost $500 or $600 with a two-year contract. A bit pricey aye. But despite its unbeatable looks and features, the iPhone has some weaknesses. You can't download songs directly onto it from the iTunes store, you can't sync it with a computer wirelessly, there are no games in it and you can't use it without signing up for cellular service.
Email Post