Recent estimates have ranged widely from magnitude +2.1 (about as bright as Polaris, the North Star) to a dazzling -8.8 (about 40 times brighter than Venus)!

David Moore reported seeing the comet on New Year's Day evening from Dublin, Ireland. He writes: "After searching for over half an hour in strong twilight I saw it easily in 20x80 binoculars from an upstairs window. I could see a small fuzzy and surprisingly bright head about as bright as the mag 3.5 star Lambda Aquilae 6 degrees above it. That said, it was not an easy observation given the strong twilight and the comet was only 3.0 degrees above the horizon!"

"My eastern view was largely obstructed by trees," Bortle said. "Still it was somewhat amazing to see the comet against such a bright sky and through all those tree branches! From experience in making similar observations, I'd judge that it was not any fainter than 2nd magnitude."

Please note that people living further up in the northern hemisphere (US and Canada) will be more favourable to view the comet. The comet will be much closer to the horizon when viewed from lower latitudes such as Singapore so the trick is to try to spot the comet in broad daylight, say half and hour before sunset. I've been waiting for such a bright comet to grace our skies since the Comet Hale-Bopp and Hyakutake days. I'll try spotting it later this evening and throughout the week if the weather permits.

Spaceweather.com has a nice photo gallery of the comet.

I've created the following image using the excellent Stellarium software. It shows how the sky will look like for those of us in Singapore at 7pm tonight. 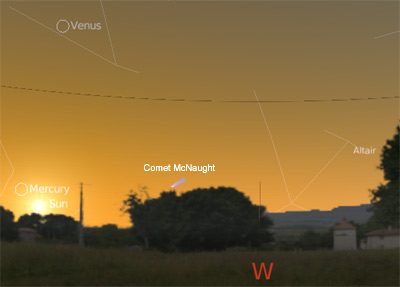 As you can see, it is impossible for us in Singapore to view the comet once the sun sets. I reckon the best time to try to spot it is from 6.30pm onwards. The sun will be up but if the comet is as bright as what everyone is saying, then we may just spot it in daylight. It may be difficult though. You need a good pair of eyes, know where to look at and a very clear and unobstructed sky.

Jay said…
Hey,
Nice post on the comet! I was really interested in the fact you got the data up in Stellarium. How did you do that? I'm assuming you added the data yourself since when I try searching for Comet McNaught, nothing pops up.

Anonymous said…
Hi. I tried to catch a view of the comet after sunset on 15 Jan 2007, from the top of Mt. Faber. Cloud cover made it a nearly fruitless exercise, but at nearly 8PM my wife and I caught a very bright yellow dot at West-Southwest, nearly 20 degrees above the horizon. It was nearly twice as bright as Sirius, which we saw behind us at the same time. We did not see a tail. We saw it for only 1 minute before it was obscured by cloud. Do you think it was the comet, or was it something else?
16.1.07

I.Z. Reloaded said…
Hi eel, I don't think what you saw was the comet. It is pretty difficult to spot it on the 15 because it is too close to the sun and by 8pm it has already set.
16.1.07