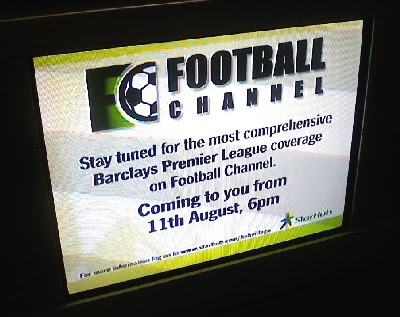 Football fans in Singapore, unhappy with the new price hike by cable TV provider StarHub, will get a dedicated English Premier League channel this month. StarHub recently announced this as part of its new Sports package. From The Postman:

StarHub today announced that it will add two more channels - Goal TV 1[1] (Channel 107) and Goal TV 2 (Channel 108) to its cable TV Sports Group package from 11 August 2007. Together with its new dedicated Barclays Premier League channel – Football Channel (Channel 27), these additions bring the number of channels available in the Sports Group from four to seven.

Taking Hubbing to a new level, StarHub will also stream Premier League matches on Football Channel ‘live’ via its broadband and mobile platforms, notching another first for the company and for sports fans in Singapore. Customers of StarHub Digital Cable’s Sports Group can watch Premier League matches ‘live’ on i.View[2] and MobileTV Xtra[3] at no extra charge till the end of the Premier League season in May 2008. i.View and MobileTV Xtra are StarHub’s value-added services for its broadband and mobile customers respectively.

A total of four ‘live’ and two delayed matches will be aired on Saturdays, with another four ‘live’ matches to be scheduled on Sundays and Tuesdays. In addition, fans can also look forward to supplementary Premier League programmes that will add depth to StarHub’s Premier League coverage.

I guess football fans will generally be happy with this new offering from StarHub since we have more matches to watch this season, despite having to pay more to subscribe to the Sports plan. I've said it before in an earlier post. We have no fucking choice since StarHub now owns the rights to broadcasting the English Premier League in Singapore. I'm just hoping they won't be increasing the price again next year.

Anonymous said…
10 bux more... I don't know man. I prefer if they don't charge us more and give us an option to pay more if we want to watch more games. But like you said. No fucking choice.
2.8.07

Anonymous said…
Do you know how long does StarHub hold the rights? I hope Singtel MIO and ESPN can outbid them next time.
2.8.07

I don't think ESPN has the money to outbid StarHub. If it does, it would have won the bid already.

Singtel looks promising. It has the wealth. And I'm sure they want football fans to convert to their MIO TV.
3.8.07

Anonymous said…
Did anyone missed the pre, h/t & post game commentary by John Dykes and Co. ? Football Channel's content may have more games but it lacks the quality of ESS' commentary.
More live matches.. ok fine, so how many ppl here support teams outside of the big 4? I would put it at less than 10% in reality - so how does that justify for the increased number of live games and ask the rest to pay for it?
12.8.07

Anonymous said…
What a woeful coverage last night on the new Football Channel. Carlton Palmer as an expert analyst? Did anyone see him play? Overall, dreary and lacking in passion. Starhub - are they having a laugh?
19.8.07