It is that time again when we bid farewell to the year and welcome a new one. It is also that time of the year for me to look through my archives and pick out my best postings of the year. It is not easy picking out my favs from more than 800 postings. From Xiaxue's cyber war with Fiona Xie to the snail that crosses the gap, here are the Best of IZ Reloaded in 2005.

Do you think that your country has ridiculous rules? For example, here in Singapore, there's a law that bans chewing gum. And in Bhutan, no smoking is allowed in public. Well, think again. People in North Korea are having it worse. Kim Jong IL and company decided that all men in North Korea must get a proper short-back-and-side hair cut! They are running a campaign called "Let us trim our hair in accordance with Socialist lifestyle." 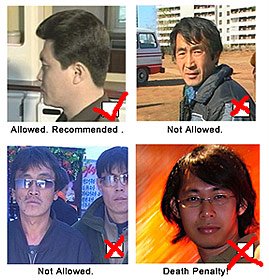 Judging from the photos of different hairstyles (above), I don't think they will welcome me there with open arms. A North Korea TV show recommends 1-5cm for back and sides and 5cm for tops of heads. If they've still got any, men over 50 are allowed up to 7cm, to cover baldness. And I reckon, it is better if you get a haircut such as the one below.

In a few months time, you'll see men all over North Korea looking like their leader. Oh, the TV show also recommends that men should get a haircut every 15 days. I think I should open a barber shop in North Korea. Business there must be booming! The full story can be found in this BBC news article. 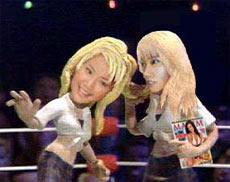 Celebrity Deathmatch between Singapore blogging queen and Maxim contributor Xiaxue (right) and MediaCorp TV actress Fiona Xie (left), coming to a venue near you! The two of them recently had a cyber war with Xiaxue launching attacks on Fiona (oh yes, she blogs too) and the result is Fiona shutting down her blog. Awwww. So, wouldn't it be great to see these two ladies in real action? Pulling each other's hair apart. Punching, kicking and scratching each other. Anyway Xiaxue, I actually made you taller, with nicer hair and I even have you pulling Fiona's hair. Oh and more importantly, as busty as Fiona too. More or less.

Happy Lupercalia to all. Happy what? Well, have you wondered why you celebrate 14 of February aka Valentine's Day? I asked most of my friends through the years and nobody really knows. Some do it because they are Christians and it is kind of a Christian tradition (Saint Valentine). Others do it because it is a day of love or friendship.

Ever since I first took up the gigantic task of researching about religions many years ago, the subject of Valentine's Day sprung to my mind every few times. So I decided to find out more.

It was in the year 1997, when I had a chance to interview a Catholic priest as part of my religion research. We were talking mostly about what is in the bible and validity of most of the stuff in it. After a few hours of non-stop debating (and mind you, debating about the bible with a leading priest is quite a task), we decided to have a smoke break. Yes, he smokes too. Davidoff, I think. Then he asked me, "Son, why do you take this path?" I looked up at him with a puzzled face. He continued, "Why torture yourself to seek the truth when the truth is available right before your eyes in the Holy Book?" I took a whole minute and several puffs before answering. "I've been doing this for a year. I think it is important for mankind to question everything that is being told as the truth and to find out the real truth. With due respect sir, the Bible is a version of the truth, but not the truth itself." I told him that I respect the various religions in the world and I do respect him or else I wouldn't be smoking with a priest. We both laughed. It was at the moment, I asked him about Valentine's Day.

"Saint Valentine's Day," he said. I nodded. He asked me if I was doing anything on Valentine's Day that year. I joked by simply saying I had too many girlfriends therefore it's a headache on V-day. I then went on to ask him about the history of Valentine's Day. He told me the origin of Valentine's Day goes back to the third century, when two Christians named Valentine were martyred. There are various versions of the stories but he couldn't point to one that could be proven as the truth. He said that the Vatican lists 17 Valentines in the encyclopedia of saints. These are spread out among countries, including Italy, France, Spain and Germany, but the church does not designate any of the 17 as the Saint Valentine.

I wasn't too happy with his answers so I went back to my research. I came across a day celebrated by the pagan Romans, 14 February. Hey that's the same day as Valentine's Day. What I found is that the Romans celebrated February 14 to honor Juno Fructifier, Queen of the Roman gods and goddesses, and that on February 15 they celebrated the Feast of Lupercalia in honor of Lupercus, the Roman god who watched over shepherds and their flocks. Young Roman males would sacrifice goats, put on the goatskins as a loincloth and then run around striking young women with thongs from the same goatskins. As Christianity became more widely accepted, pagan beliefs and celebrations were being replaced by the Church. The ancient Lupercalia was christianized and became Saint Valentine's Day to honour Saint Valentine.

I had a chance to meet the priest again on Valentines Day that year. I told him what I found out about Valentines Day, and that he was wrong. The whole V-Day thing originated from a pagan celebration and that the church changed it so that people can celebrate it 'legally' in the eyes of the Church. He looked at me rather surprised that a young man would bother so much about the origins of such an unimportant day. He smiled after I finished telling him the story. He then walked me out and passed me a gift. It was a red aluminum case shaped like a heart. I opened it and there were chocolates inside. Now, how did he know I like chocs? There was also a small piece of note. It says, "Happy 14 of February, Saint IZ".

Now listen up. I'm talking to you people from the Straits Times. You have more than 280,000 registered users who are reading your news daily for free. If you're thinking of charging us to read your news online, you would be wise to change your strategy. How many of these 280,000 users do you think you can retain? Half of it? Fat hope. This strategy of yours is not only a failure from the beginning but I can't wait for the day when you switch to the free subscription. You said it's also not a tenable business model to charge for the print edition of the newspaper and not for its online edition. Well listen, I'm going to give you the following advice for free!

1) Revert to the current free subscription. Why would people who already have Straits Times print edition want to pay to subsribe for the online edition, beats me? By asking people to pay, you will be looking at a drastic reduction of the 280,000 users that you claim to have now.

2) It is not a tenable business model to charge for print edition and not for its online edition? That's where you are wrong. Your online edition contains a wealth of news. Information that is worth a lot. Instead of charging users to use your online edition, you should use targeted Ad based keyword advertising. If you have no idea what that means, take a look at Google. Targeted Ad based keyword advertising will bring new kinds of advertisers that you would never dream of. More advertisers. More money for you.

3) Open your archives. Why would you want people to pay to read old news? The targeted Ad based keyword advertising will work splendidly once you open up your archives. Don't leave old news in the shelves. Release it to the public. Free.

4) Maybe you do not know this, but bloggers can be quite handy friends to have. We bloggers quote news everywhere. We link to your news on our blogs. By restricting your online news to only those who pay, you lose something much more- online exposure. And you should know by now that news spread in blogosphere faster and wider than anything that has ever existed so far.

5) Include trackbacks in your online news. Yes, trackbacks are standard in blogs where we list down other blogs that are referencing our stories. You can use trackbacks for your online edition too. It would be a good way to check on who is using your news for their blogs and also a good way to judge which news are hot and which aren't.

6) Or you can include a Technorati search like they used in BoingBoing (look for the 'blog comments link' under each story). The Technorati Cosmos search works by listing all the blogs or websites that are using your link.

There you have it Straits Times. And while you are it, do sack the person who gave you the idea of charging users to read your online content.