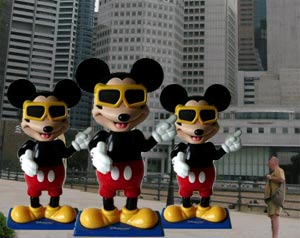 It seems that anyone can start a cult and gain a following these days. Take for example, 61 year old Ayah Pin. He is the founder of Malaysia's Sky Kingdom also known as the Teapot Cult. He claims to have thousands of followers in Malaysia, Singapore, Bali and beyond.

I was thinking maybe I sould start a cult of my own too. Ayah Pin and his followers were noted for building a giant pink teapot which is the centrepiece of his many structures at his Sky Kingdom village. More than just a structure, the giant pink teapot is a symbol of the cult's belief in the healing properties of water. You see, if you want to start a cult, you need a symbol, a structure or statue of somesort. After some thinking and with divine intervention of course, I finally got it! So here it is. Presenting The Cult of The Three Blind Mice (see pic). I even have an anthem for my new cult. It goes something like this.

To celebrate the 1st blogging conference in Singapore known as Bloggers.sg 2005 (held tomorrow), I came out with the Blogpoly Singapore Edition. I've included the Singapore blogs that were nominated in the Asia Blog Awards last year, the editors of Tomorrow.sg (the organiser of Bloggers.sg) and other popular blogs. Pardon me if I did not include yours. Thanks to Little Oslo for the inspiration. He did the original Blogpoly.

Lots of you wrote to me asking if IZ Reloaded will be showing up at Bloggers.sg 2005 tomorrow. I'm sorry to say that I will not be there. I will be doing my laundry tomorrow. Ok seriously, I'm afraid of crowds. I heard there will be plenty of bloggers there including their friends, spouses, partners, family members, etc. The media might also show up. I'm media shy. So for those who are dying to see me in person, I'm afraid you have to make do with these photos (here and here) of me for the time being. Enjoy and support Bloggers.sg 2005. Oh btw, if you do see someone who looks like me dancing away at the party after the conference, the dude isn't IZ Reloaded.

National Kidney Foundation CEO TT Durai must have had bad legal counsel. Whoever advised him to sue the Straits Times for an article that alledged NKF installed a gold tap in his toilet, is definitely out of his mind. Why? Because the whole case against the Straits Times has overturned for TT Durai and NKF. Not only has TT Durai withdrawn his defamation suit against Straits Times, his reputation and the good name of the NKF have been damaged along the way.

In court recently, the secrets of the NKF were revealed. TT Durai took home S$1.8m in total over the last three years. He admitted he flew first class. NKF has denied in the past that its executives fly first class. TT Durai and other executives also had access to to eight company cars and drivers. It was also revealed that NKF has reserves of S$220m! NKF has publicly revealed that its reserves can only last for three years. Mr Durai was also alleged to have a commercial relationship with an NKF board member.

The public is shocked and outraged. Thousands cancelled their donations. I think what is more surprising is that the public hasn't done this sooner. It is the public that has been contributing to NKF's wealth for more than 30 years. The public has not made it clear to NKF in the past to be transparent in how it uses the money it collected from the people. And now, after the secrets have been revealed, everyone is getting upset. People are calling for the TT Durai to resign. Yes, as the CEO he would have approved all the expenses such as the expensive tap but who are the people that kept him at the top? The board members of NKF. They are fully aware of what is going on in NKF. They are the ones who approved TT Durai's salary. They are the ones that looked through the annual financial reports.

So what next for NKF? To get out of this mess, NKF should explain to the public how it manages its money. It needs to make its finances public. TT Durai, the board and the finance committee should resign. And what should we, the public do? Go sign the petition, flood NKF with letters and calls, stop donating during their televised charity shows until they do something about it.