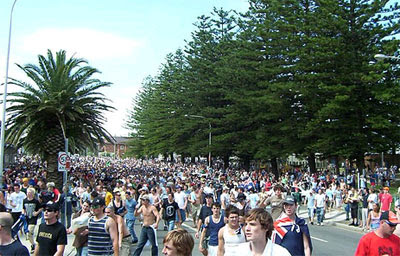 Earlier today, I interviewed Warren Hudson who took this photograph of the Cronulla riot. You can view his Flickr photoset here. Warren is a 22 year old university IT student. He lives in The Sutherland Shire in Sydney's south east. On Sunday afternoon, he noticed Police and news helicopters circling Cronulla Beach and he decided to go down to the area to check it out and take photos.

According to Warren, the day began with somewhat of a carnival atmosphere. There were Australian flags that were either being waved, worn as shirts, shorts or bikinis. There where also the familiar chants of 'Aussie, Aussie, Aussie, Oi, Oi, Oi', the national anthem and Waltzing Matilda. Warren said, "A lot of people saw the day as a show of solidarity against ethnic gang violence that has been brought into Cronulla, and then there would be reports of 'Lebs' (Lebanese), and the crowd would take off in that direction, and there would be shouting of 'Kill the Lebs' or other violent suggestions."

I asked him about the police presence in the area and he commended the police for doing a good job of handling the crowd. He said, " In most cases the crowd was cooperative with the Police. I have to give the NSW Police credit for how they handled the situation, and how they kept a good relationship with the crowd, and managed to not inflame the situation further. To my knowledge, no local shops where vandalised. The Police also setup a road block on the main road into Cronulla, The Kingsway to prevent cars from getting into the area."

Warren reported that acts of revenge happened last night when Lebanese gangs struck Cronulla after rallying at the notorious Lakemba Mosque. "There where reports for hours before hand that they'd be heading down to Cronulla, yet the Police did nothing to stop them," he said.

"There were approximately 100 Lebanese who drove down and smashed car windows, shop windows, and smashed their way into a restaurant and bashed a person with a baseball bat, and even threatened to kill others. There have also been reports of shots fired."

Warren who commended the police for doing a good job with the riot on Sunday, felt that this time the police failed at protecting Cronulla. He said, "There were 100 Police on duty in southern Sydney last night, and they've received a lot of criticism for just stopping the car loads of Lebanese gangs that where doing damage, and releasing them shortly after without charging them."

Warren, like most locals living in The Sutherland Shire, believes that what happened on Sunday was the result of years of inaction by the government to combat Lebanese and Middle Eastern gangs that come to terrorise Cronulla beach. The bashing of 2 teenage volunteer lifeguards at North Cronulla Beach by 16 Lebanese men , according to him, was the proverbial straw that broke the camel's back, and therefore 'The Shire' took a somewhat vigilante approach to the problem.

Warren explained to me more about the problem of the Lebanese gangs in Cronulla. "There have been problems with Middle Eastern gangs coming to Cronulla for years now, particularly since 1995, when the NSW State Government downgraded Cronulla Police Station and removed Police resources from the area," he said.

"The gangs knew that the Police and the politicians had been taking a 'culturally sensitive' approach of pussyfooting around with ethnic gangs, for fear of the 'Race Card' being used against them."

"Australia is a very tolerant country, and is racially diverse. Most cultures in Australia live in harmony, which can be seen through events that the Italian, Asian, Greek and Irish communities put on throughout the year, although there is a serious problem with Lebanese gangs in Sydney. The Lebanese gangs don't just come to Cronulla to use the beach - they 'claim' it as theirs, and swear at the locals to leave."

He added that the Lebanese gang problem is widespread in Sydney. "There has been a lot of tension because of the recent gang rapes by Lebanese against Australian girls, and the constant harassment and threats of sexual violence against young women all over Sydney. These are not isolated events. I would be shocked to find a girl in Sydney who has not been harassed or threatened by Lebanese gangs," he said.

Warren hopes that tonight, there will be less violent in 'The Shire'. He said, "They've put 400 Police officers on duty in southern Sydney. I've seen a lot of Police in Cronulla tonight, so hopefully they'll do things properly tonight."
Email Post