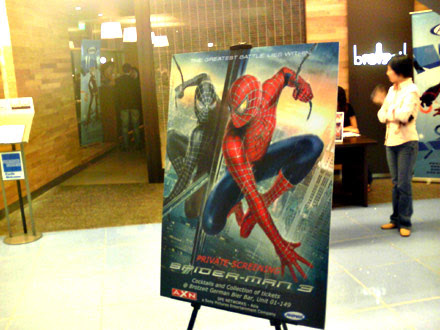 Last night, I attended a special private screening of Spider-Man 3 organised by AXN at Golden Village, Vivo City. Spider-Man 3 will only be shown in cinemas here in 4 days time so to be one of the lucky ones to watch it before the rest of Singapore does is a real privilege. 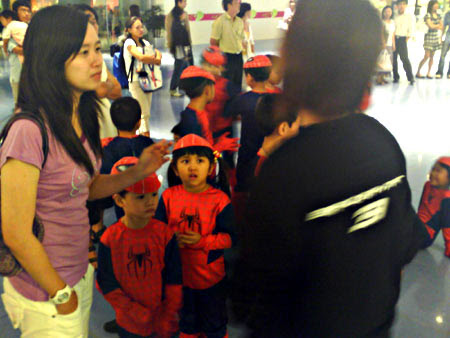 The first thing I noticed as I walked towards the cinema were these kids dressed up in cute Spider-Man costumes. Later, I was told that there was another Spider-Man 3 screening held at the same night- the Gala screening by Mediacorp and Starhub (I think). Besides the little Spideykids, they also had a red carpet entrance for the Gala's star guests. The private screening by AXN that I attended wasn't a Gala in any sense but at least I think it had something that the Gala didn't provide - free cocktail for everyone!

The cocktail was held at Brotzeit German Bier Bar at Level 1. They even had Spiderman to welcome guests at the door. 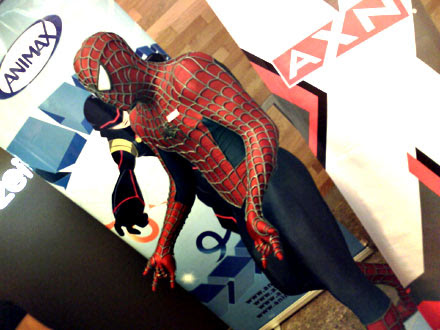 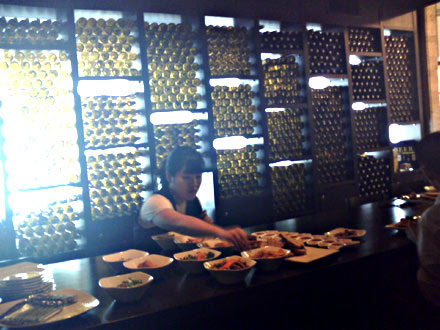 There were free flow of drinks and an endless serving of food for all the guests. 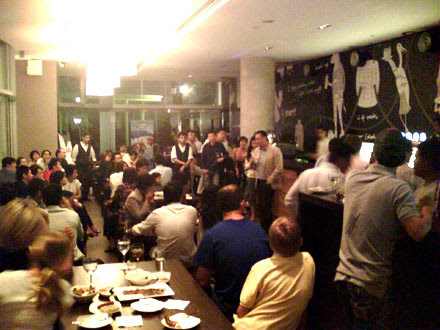 Here's the MD of AXN Asia thanking all of us who came and telling us what a kick-ass movie Spider-Man 3 is. 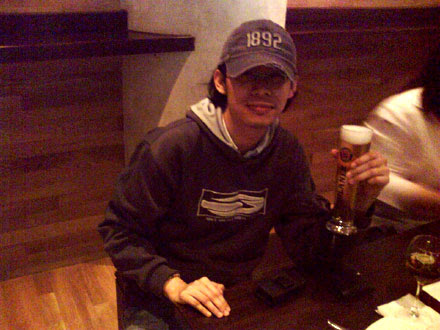 And no private screening will be complete without a photo of me getting drunk. I really wanted to come to the screening wearing my Spiderman costume but Peter Parker wanted to borrow it. Too bad.

So after the nice cocktail, we head off to Golden Village to watch the movie but before that, everyone had to surrender their mobile phones before entering the cinema hall. They didn't want anyone to do an unauthorized recording of the movie. Security was tight. They even did a body search on all of us and had us go through metal detectors. It's like getting into an airplane!

Now to the movie. Spider-Man 3 is really a kick-ass film. It has all the ingredients of the first two installments and more. One of the reasons why I wanted to watch it so badly is because of the Black Spider-Man. In the movie, a small meteoroid crashed near Peter Parker aka Spider-Man while he was making out with Mary Jane on a huge spider web. The meteoroid contained a black liquid-like alien entity that followed Peter Parker home. One night, while Peter was asleep on his bed, this alien entity wrapped itself around him. The next thing he knew, he was hanging beside a building in a black Spider-Man costume with more powers that he could ever imagined.

I just have to say this. I think all superheroes should wear black. Black is so cool. Get rid of all that brightly coloured spandex! Wear black instead. I guess that's why I love Batman so much because he wears black.

I won't give away the movie here but do watch out for the evil Venom who will only appear near the end of the film. There's also the Sandman who is actually the guy who killed Peter's uncle in the first film. The Goblin (Goblin Jnr) also makes a return. As for the ending, I think it was a little weak. I would prefer everyone to die, leaving Spider-Man the last man standing. I guess I'm a sadist. I hate happy endings.

Overall I gave Spider-Man 3, 4 1/2 spider webs out of a possible 5. I wanted to give it a 4 but the part when Peter Parker used a spider web to make out with his girl under the stars made me add another 1/2. Now, if only... hmmm. Nevermind.
Email Post

Parka said…
Hmmm. I knew there's some function with food but didn't have the VIP pass.
26.4.07

Anonymous said…
I really hope what you say of the movie is true that it really kick ass. Heeeee. Will watch it when it opens. Btw, love ur pic. As always. ;o)
26.4.07

Anonymous said…
Dude, you drunk before watching the movie? Winner!
26.4.07

Anonymous said…
I think your AXN private screening is much better than the Gala. My friend who attended the Gala said it's a waste of time waiting for all the snobbish stars to walk the red carpet.
26.4.07

Anonymous said…
so does venom really look like the one drawn in the comics?
26.4.07

Anonymous said…
Do one private screening for all your readers lar.
26.4.07

Anonymous said…
I prefer the Black Spiderman too.
26.4.07

Anonymous said…
I will only attend gala screenings if they invite real stars from Hollywood not those crap Mediacock ones!!!
26.4.07

Anonymous said…
VENOM SHOULD WIN A STRAIGHT FIGHT WITH SPIDERMAN BECAUSE HE HAS ALIEN POWERS.
26.4.07

Anonymous said…
There are two possible sensations after you see the movie:

a) If you go to the movie as a movie and comic book lover, you will be happy.
b) If you go to the movie as a Venom’s fan (even is possible that Venom’s fans are much more than Spidy ones), you will be severely disappointed. Why?
• Venom is just seen in the very last 30 minutes of the movie
• Raimi Venom is nothing compared with the look of the Venom in comics. One or two scenes worth it nothing else.
• Venom has a very unworthy ending.

We knew Sam Raimi didn’t want to include Venom in his very own movie, but his revenge against Avi Arad for the imposition, became the most important Spiderman’s foe into a second hand villain.
26.4.07

Anonymous said…
I read from some fan sites that Venom gets beaten by a bunch of metal poles. Some death huh.
27.4.07