The Truth Behind Easter 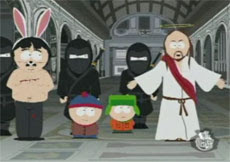 Thanks to the latest episode of South Park, I just discovered the truth behind Easter, the Easter Eggs and Easter Bunny. Are you ready for it? I warn you this secret will have a significant impact on the world. Ok, here goes. St Peter, the first Pope is actually.... a RABBIT. That's right, a rabbit and there's a cult called the Hare Club for Men that has been around for ages to keep this secret alive from the evil Vatican who doesn't want a rabbit as a Pope. Now, before you start shouting blasphemous, go watch this episode to find out more. Go to ALLSP.com, click on Season 11 and look for the episode Fantastic Easter Special. Have a Good Friday, Happy Easter and enjoy the weekend aye.

Update: The Catholic League has released a statement on its website (Thanks David Ferrine) :

On last night’s episode of the Comedy Central show South Park, Catholic League president Bill Donohue appeared as one of the cartoon characters, along with a figure of Pope Benedict XVI. The Easter script depicted Donohue chastising the pope for being too soft. Donohue then takes over as pope. When a Jesus figure appears, he has both the pope and Jesus arrested. After Jesus is killed by Kyle, he resurrects and kills Donohue.

Donohue commented on this today: “I have no idea why ‘South Park’ creators Matt Stone and Trey Parker caricature me as a heartless thug. In any event, I stand convicted and have no defense. Now I have to get back to business—I hear someone just took some liberties with the Easter Bunny.”

Anonymous said…
Thanks dude. My Easter weekend will be spent watching all these South Park episodes.
6.4.07

Anonymous said…
no cartman in this episode.

Anonymous said…
I knew it all along.. there's always something fishy about the easter bunny and egg thingie.
6.4.07

Anonymous said…
The Southpark creators will surely get into trouble again this time
6.4.07

no cartman in this episode.

Eric Cartman is in this episode - sitting on the Easter Bunny.
7.4.07