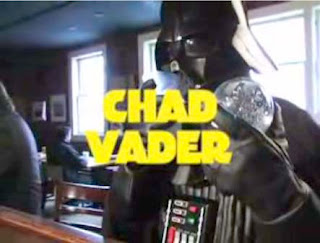 Star Wars turns 30 today, so what better way to celebrate the occasion than to search everyone's favourite video site YouTube, for the best/funniest/coolest Star Wars videos. I selected these 30 clips and they are listed below in no particular order. Pardon me if your favourite clip is not here aye. Enjoy and may the force be with you. Always.

Here are the 30 clips to celebrate Star Wars 30th Anniversary:

1) The Star Wars Kid - Dude used a golf stick to show off his Darth Maul moves. Clip became a hit and made him into a star.

3) Chad Vader - The first episode where we get to meet Darth "Chad" Vader who works as a Day Shift Manager.

8) What really happened after the Death Star blew up - Emperor Palpatine gets worked up when he receives a call from Darth Vader informing him that the Death Star has been blown up.

14) Star Wars in 3 minutes - Made with action figures and cool effects.

15) Star Wars : The Unknown Discovery - A cross between star wars and pulp fiction.

17) Star Wars: TD9993 the movie - Sandtrooper TD9993 is in search of a killer on the harsh planet of Tatooine. Filmed completely in stop motion using Star Wars figures.

19)Star Wars VI: Return Of The Jedi Extended Scene - The truth that was too hard for Luke to swallow.

22) Star Wars Empire Strikes Back Extended Scene - The frozen plains of Hoth weren't the only thing Luke was trying to escape.

23) Star Wars Phantom Menace - Spoof made by the Brits!

24) The Emperor looks for a new job - After the defeat of the Empire at Endor, the Emperor has decided to seek a new line of work.

29) Star Wars Gangsta Rap - Darth Vader and Emperor entertains us with a rap.

30) Star Trek vs Star Wars - What would happen if the starship Enterprise encountered the Death Star?
Email Post

Miss Cellania said…
My contribution to the anniversary is an article where a dozen writers share their memories of the first time they saw Star Wars.
25.5.07

Anonymous said…
you should find the original on which that rap version is based. http://www.newgrounds.com/portal/view/174837
(the first version is licensed or something)
26.5.07

Unknown said…
You forgot the original clip of all clips -- Asciimation Star Wars!

Anonymous said…
Dude, this made it to Slashdot and a lot of other places.

Anonymous said…
nice list, but how could you leave out the ascii starwars and thumb wars!?
26.5.07

JackFrost said…
Check this out

Jacob Dybala said…
I found this great clip on jokes.m3Rlin.org. It's a great claymation movie about Darth Vader and the Emperor: http://jokes.m3rlin.org/funny/darth-vader-calls-the-emperor-claymation . I laughed so hard!!!
17.6.07

Anonymous said…
Cool stuff! I had some of them on my russian star wars web site but here you get most full collection!
22.11.07