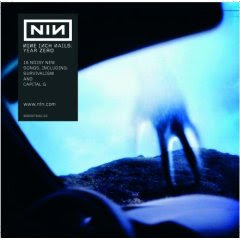 You can listen to all the tracks from Nine Inch Nail's latest album on their MySpace page. Cool aye! According to the album page on Amazon.com, "Nine Inch Nails' sixth studio release, Year Zero takes the concept album further than it may have ever gone before. In advance of its release, URLs were hidden in tour t-shirts, music- and image-filled USB drives were 'found' at concerts, and dozens of websites have been packed with conspiracy stories that all involve the year 2022 or 'Year Zero.' Each clue is part of a cohesive whole, requiring a listener to follow an exhaustive web trail to grasp the entire tale." If you're into industrial rock, I think you will love Year Zero.
Email Post

Chuang Shyue Chou said…
How is this one? How do you like it?

I'm more into electro-industrial than metal-industrial.
14.5.07

Anonymous said…
You may want to try to sample of the key highlights of NiN latest effort here on my blog.