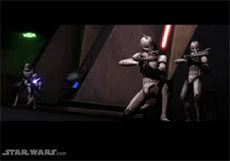 Thanks a lot George Lucas for getting me excited at 7 plus in the morning! I'm talking about the trailer for the upcoming Star Wars animated series, The Clone Wars. It's now up on the revamped Star Wars website. And oh boy, it's one hell of a trailer. I've always loved the Clone Wars series that was shown on Cartoon Network but this is definitely something else. It has better animation, better sound and hopefully a better script too. Each episode is also much longer than the Cartoon Network's Clone Wars series. About 300 Lucasfilm employees are working on the new Clone Wars, which includes Lucasfilm Animation and Lucasfilm Singapore, where the animation work is taking place. No release date has been announced yet. Damn it. I'm getting goose bumps every time I watch this trailer. And I've already watched it like 5 times this morning! And the best part, it is made in Singapore. Yay!