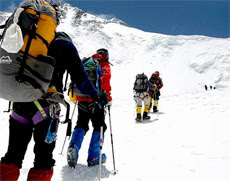 I've always wanted to climb Mount Everest. I think it's definitely one hell of an achievement to be able to stand on top of the world.

But after watching Everest: Beyond The Limit on Discovery Channel last night, I've decided that it's best for me to stay on lower ground.

Don't get me wrong. Everest: Beyond The Limit is not your everyday nature documentary - it is in fact the most exciting reality show on TV right now. Really!

The intense and emotional epic follows six climbers as they ascend from base camp at 5,380 metres to the summit at 8,850 metres. But watching the show makes me ask this question: Is it worth risking your life to climb Everest? In the first episode last night, the climbers had to do a rescue operation because one of the Sherpas was down - his brain was swelling due to lack of oxygen (I think). On the next episode, it will be revealed that he died. Sigh. The dangers of Everest - and they are only halfway towards the summit!

I guess after watching what the climbers go though, there will be no Everest for me but I know for sure I'm going to catch the next episode. You can watch Everest: Beyond The Limit every Tuesday at 10pm on Discovery Channel Asia. Damn, it's exciting!
Email Post

JDsg said…
Didn't get the chance to watch the show on Discovery the other night (old fart that I am, I'd already gone to bed), but I've read John Krakauer's book Into Thin Air, so I have a pretty good idea of what balls climbing Everest takes. According to Krakauer's book, about 1 person in 4 dies while trying to climb Everest. Better to climb Mt. Faber instead. :)
24.5.07